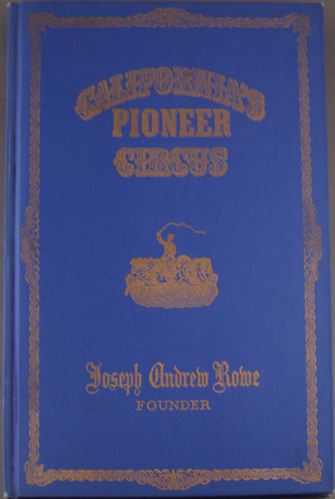 8vo. 98 pages. This copy is #381 of 1,250 copies, 50 of which were reserved for private distribution. Association copy inscribed by the editor: "To Irene Simpson, from Albert Dressler, San Francisco, July 31, 1947. " Irene Simpson was a woman of numerous talents, not the least of which was being the first woman president of the California Historical Society (1970). She graduated from Stanford and later worked for Wells Fargo Bank and Union Trust Company. She spent almost 30 years compiling and documenting a mixed collection of books, artifacts, pamphlets, photographs, articles, and ephemera on the era between Wells Fargo's founding in 1852 and the San Francisco earthquake and fire of 1906. She became nationally known as a speaker on Wells Fargo and the American West. She later married historian Aubrey Neasham, a restorer of Old Sacramento. Numerous illustrations and facsimiles. This book details the Pioneer Circus of Joseph Andrew Rowe, who travelled with his circus to the cities and gold camps of California from 1849 to 1858. An interesting documentation of an unusual business during the Gold Rush era. Bright blue boards with bright gold decorative borders and titles. Gold picture of a circus ringmaster and four horses also on front cover. Slight age toning to endpapers. Very light shelfwear to head and tail of spine.